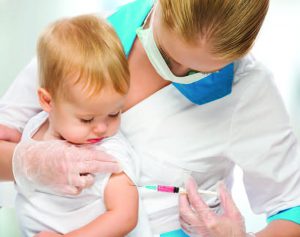 Newly passed legislation in California limits medical exemptions to no more than 5% of school children while the number of children at risk for vaccine-induce autoimmune reactions exceeds that number.

California Senate Bill SB276 limits medical exemptions to fewer than 95% of students vaccinated, given that a 95% vaccination rate is required to produce immunity in a grade school population.

However, a recent report published in the European Association For Predictive Preventive & Personalized Medicine indicates autoimmune disorders have increased significantly over the last 30 years and affect more than 5% of individuals worldwide at the age of vaccination.”

The journal Academic Pediatrics reports that the percentage of American children with chronic disease has risen in recent years from ~12% to 54.1%. Many of these chronic diseases are classified as autoimmune disorders. The “autoimmune sub-population of school-age children are at-risk for vaccine induced side effects, some being long-term.

Today an estimated 16% of the U.S. population suffers from an autoimmune disease. Autoimmunity is called an invisible epidemic.

Medical realities begin to question the political actions taken to limit medical exemptions in public schools such as in California.

According to an article in the San Francisco Chronicle, Senate Bill SB276 in California allows the Department of Public Health to review medical exemptions at schools where fewer than 95% of students are vaccinated. It also gives the state the power to review exemptions written by doctors who have granted five or more waivers in a calendar year. State officials could reject exemptions they find to be fraudulent or inconsistent with medical guidelines.

SB276 repeals parents’ right to keep their children from being vaccinated if it violated their personal or religious beliefs. The number of medical exemptions quadrupled thereafter, raising concerns that some doctors are providing fraudulent waivers.

The new law also requires children to obtain new medical exemptions when they enter kindergarten and seventh grade or when they change schools.

Who should NOT be vaccinated?

The Centers for Disease Control does list “Some people who should NOT get the MMR (measles, mumps, rubella) vaccine.” The CDC bulletin says:

Tell your vaccine provider if the person getting the vaccine:

Vaccines are not totally protective

According to the CDC:

The CDC bulletin goes on to say: “Some people who get two doses of MMR vaccine may still get measles, mumps, or rubella if they are exposed to the viruses that cause these diseases.”

CDC: Experts aren’t sure why; it could be that their immune systems didn’t respond as well as they should have to the vaccine or their immune system’s ability to fight the infection decreased over time. However, disease symptoms are generally milder in vaccinated people.

The above information suggests there are reasons why there are grade-school outbreaks of measles outside of failure to vaccinate.

Population data does not apply to individuals

One of the fallacies of reading published reports on vaccines among large groups of children is that that data does not provide instruction for individuals, it provides information on what works for populations.

Of particular interest is that the medical literature indicates there are children who may develop autoimmune reactions following vaccination. One report states: “The individuals who might be susceptible to develop these reactions…may not be those with previous post-vaccination phenomena and those with allergies but also individuals who are prone to develop autoimmune diseases, such as those with a family history of autoimmunity or with known autoantibodies, and the genetic predisposed individuals.”

This suggests all school students should be screened for autoimmune/allergic reactions with some sort of patch test prior to vaccination. And don’t forget, children may have been exposed to an infectious disease in their environment and developed antibodies on their own, without vaccination. So, it’s possible parents could demand their at-risk children be tested to see if they have already developed antibodies and don’t need vaccines. For example, there are labs that offer measles immunity tests for as little as $12.95. ####