Is Roundup Killing for Greed? 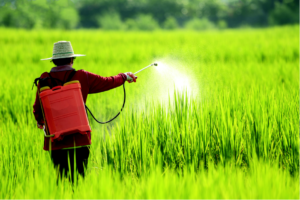 Remember the good old days in the 1950s when smoking was perfectly safe and doctors were used in TV and magazine ads? A time when it was safe to use sunscreen and talcum powder on your baby? A time when asbestos was a safe building material and thalidomide was good for morning sickness? With smoking it turned out that the industry had known for decades that its product caused cancer but hid the evidence which then led to massive litigation.

You would think that government and industry should have learned a big lesson from smoking, thalidomide, asbestos, DDT, and the like. Well, guess again, here we are with yet another clear cover-up of the harm caused by a product we have all unknowingly absorbed into our bodies from multiple sources.

I first ran into Roundup®, with its main ingredient glyphosate, when I moved my family to the sunny idyllic rural South of France along the edge of the spectacular Pyrenees Mountains to live in a charming French-speaking market village. My wife and I, along with our two children, wanted the chance to enjoy a foreign language, a culture of fresh food, clean air and a healthy, outdoor lifestyle. In short, all of the things that France had to offer.

How quickly it changed when we set up home in a suburban neighbourhood, on the edge of the village, in time for the kids to start school, and an opportunity to enjoy the Summer with record-breaking heat.

One day shortly after our arrival I was in the front yard, which was surrounded by a high box hedge, when a loud diesel tractor slowly came down the street and into view at the gate opening. There stood a man in shorts, tee-shirt and flip-flops spraying a billowing cloud of chemical out of a large hose attached to a tank behind the tractor. My car, windows open, was covered in seconds as the cloud swiftly moved toward our house. I raced inside and shut all windows in an attempt to reduce our exposure to whatever this was.

The next day I wrote a letter to the Mayor asking what chemical was being sprayed, the side-effects, the list of ingredients, etc. He refused to answer my letter, so I changed it into a petition and went door-to-door getting signatures. I was shocked to discover that 50% of all the homes had one person left living in each house after their partners had all died of cancer. None of these people had suspected the continuous spraying with a toxic herbicide permeating everyone’s house, garden and vegetable patch could be a possible cause for their cancers. The village, in its infinite wisdom, had implemented this chemical assault to eradicate weeds growing along the edge of the road – trading weeds for cancer!

After getting my petition signed by the surviving partners, I took it to the local newspaper, which printed the petition, forcing the Mayor to answer the questions. That was the moment I got introduced to Monsanto’s Roundup with active ingredient glyphosate, their biggest selling weed-killer world-wide.

After doing research aided by the Pesticide Action Network in England (www.pan-uk.org), I realized this was extremely toxic and a persistent environmental pollutant. Now, armed with scientific proof of harm, I wrote a second petition that was published in another regional paper resulting in the stopping of spraying in our neighbourhood. My petition pointed out that our street was on a steep hill running down to the river where only 100 metres downstream the town pulled in its drinking water!

The illusion of a pristine French lifestyle disappeared and we quickly started distilling all of our water to avoid the Roundup-laced tap water like the plague.

In 2015, France finally banned the sale of Roundup® for private use. Many other countries and municipalities have banned or restricted the sale of glyphosate as well. A list can be found at: www.Roundupcase.com, a site set up by the legal firm leading the attack to beat this biotech bully into warning its customers of the risks that Monsanto has spent decades denying.

If, like me, you thought that watching what you eat and exercise keeps you healthy, then I encourage you to watch the documentary Secret Ingredients by Jeffery Smith and Amy Hart. They follow five American families who do all the right things but are plagued with multiple ill-health issues ranging from auto-immune disorders to autism. One family has 21 different crippling ailments that all clear up when they change to eating organic only and filter their water, thereby removing Roundup/glyphosate, GMOS, and other pesticides from the family diet.

Amazingly, the only reason we have Genetically Modified Organisms, known as Frankenfood, is because Monsanto’s Roundup started killing the very plants they were supposed to protect. Rather than withdraw their toxic product, some mad genius at Monsanto created GMO crops that could survive any amount of Roundup/glyphosate you sprayed on them, making GMO crops Roundup-laden. It is estimated that as much as 80% of U.S. food consumed may be GMO.

The U.S. is facing the biggest health crisis in history with auto-immune disorders, allergies, and autism rates off the charts compared to 30 years ago. Roundup and GMOs are not the only cause, but when you watch Secret Ingredients you will have to admit that it is a huge contributor.

As levels of glyphosates rise in our food, soil, air, and water every day, I am reminded of a documentary by Bill Moyers in 2001 called Trade Secrets in which he has his blood analysed only to find a large number of synthetic herbicides/pesticides still present in his blood 10-40 years later! Are we facing the same problem with Roundup today? The answer would seem to be yes according to court documents released during trial in California. There are a reported 10,000 pending lawsuits against Monsanto over Roundup health damage, sparking a feeding frenzy of legal action against this Big-Pharma giant losing three lawsuits in a row, with one $2 BILLION award!

Now I admit that I have laughed at jokes about sleazy lawyers after a few personal run-ins with unsavoury practitioners: What’s the difference between a lawyer and a prostitute? The prostitute stops screwing you after your dead!

However, after investigating Roundup I have gained a new understanding for the need of someone to protect the little guy when there is possible government collusion and industry skulduggery as you can plainly read in the Monsanto papers to be found on: www.Roundupcase.com. Thank goodness for lawyers! – my new mantra.

In 2018, the German Pharmaceutical giant Bayer bought Monsanto shortly after the lawsuits started (one can only guess what the future holds for the executive who came up with one of the dumbest acquisitions in history). When word of the first large pay-out hit the news Bayer’s stock price reportedly dropped by 45%!

“You cannot say that Roundup is not a carcinogen … we have not done the necessary testing on the formulation to make that statement.”
– Donna Farmer, Monsanto Senior Scientist

Since the link between glyphosate and NHL has been established a major pay-out was awarded last year in California. Monsanto was ordered to pay $78.5 MILLION in damages to a school groundskeeper who developed cancer after regularly using Roundup. The 46-year-old man, Dewayne Johnson, has non-Hodgkin’s lymphoma. This was quickly followed by a $80.2 MILLION verdict in Hardeman v. Monsanto for causing, you guessed it, non-Hodgkin’s lymphoma.

Then, earlier this year, Monsanto was ordered to pay its highest damages yet in a massive lawsuit over the popular weed killer. A jury ordered Monsanto to pay more than $2 BILLION in punitive damages to Alva and Alberta Pilliod, a couple who were both diagnosed with non-Hodgkin’s lymphoma after using Roundup on their properties for decades.

Bayer is appealing these court decisions.

One of the key documents used in court was the product safety sheet given to Monsanto employees, ordering them to wear goggles, gloves, a respirator, chemical overalls, and chemical-resistant boots when spraying Roundup. This is in stark contrast to Monsanto’s TV ad, which shows a man spraying his lawn wearing a short sleeve shirt and shorts, which makes it appear harmless. This document was seen as proof of malice by the jury, which led to them finding against Monsanto and its lucky new owner Bayer.

There were also internal documents demonstrating possible collusion between Monsanto staff and EPA employees to attack all science that found harm, defending Roundup safety at all costs, ghost-writing the safety studies, and more. Clearly, they were putting greed before peoples’ health.

Further evidence shows that in 1999 Monsanto hired Dr. Perry, a professor at the University of Wales, to carry out a secret review of glyphosate. Dr. Perry concluded that glyphosate is capable of producing genotoxicity both in vivo and in vitro by a mechanism based upon the production of oxidative damage. Oxidative damage to DNA can lead to cancer. This is evidence that this company knew as early as 1999 that their top seller could cause cancer but they failed to disclose this study to the public until the first lawsuit beat these documents out of them in the court discovery process.

Dr. Mercola’s site, www.mercola.com, states: “Chances are, if your glyphosate levels are high, you probably have a number of other pesticides in your system as well. Fermented foods, particularly kimchi, are potent chelators of these kinds of chemicals. Taking activated charcoal after a questionable meal can help bind and excrete chemicals as well. Remember to stay well-hydrated to facilitate the removal of toxins through your liver, kidneys, and skin.”

Glycine is an important detox aid for glyphosate in particular. Dr. Dietrich Klinghardt, recognized as an international authority on metal toxicity and its connection with chronic infections, recommends taking 1 teaspoon (4 grams) of glycine powder twice a day for a few weeks and then lower the dose to one-fourth teaspoon (1 gram) twice a day.”

Fulvic acid also helps eliminate glyphosate from the body. This product can be easily found and bought online.

We are living in a war zone, with GMOs, Roundup, mandatory vaccinations, the arrests of scientists and businessmen who cure cancer, chemtrails, restrictions on herbal remedies, fluoridation of public water supplies, and more. It is down to all of us to stand up and say, No! It’s My Body. It’s My Choice!

“Only after the last tree has been cut down,

Only after the last river has been poisoned,

Only after the last fish has been caught,

Only then will you find that money cannot be eaten.”
— Cree Indian Prophecy