For a disease considered incurable, a physician in Italy has begun to provide a common B vitamin to successfully treat a debilitating motor-nerve disease commonly known as Parkinson’s disease. The importance of this startling discovery has escaped major news outlets. It should be heralded on television and in newspapers worldwide. But it has only been reported by an obscure European news source.[i] 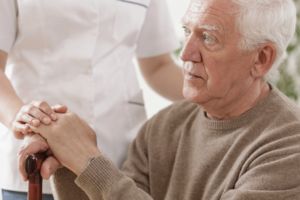 History of Vitamin B1 and Parkinson’s

It has taken two centuries for a vitamin-phobic medical profession to hesitantly begin to treat Parkinson’s disease with Vitamin B1 (thiamin). Historically, the link between Parkinson’s disease and thiamin deficiency has been agonizingly slow to develop.

Thiamin, or Vitamin B1, was the first vitamin to be discovered. Vitamin B1 was first synthesized in 1936.[iii] So, dietary supplementation was possible from that point forward.

It took until 1967 for the first published report to appear showing that a decline in brain dopamine levels of pigeons was due to experimentally induced thiamin deficiency.[iv]

A link between thiamin deficiency and low dopamine levels was discussed in 1987 in an experiment that attempted to determine why rats tend to eat mice (muricide). Low dopamine levels induced by a shortage of thiamin in the diet were linked to this abnormal animal behavior.[v]

In 1988, researchers noted a thiamin-deficient diet decreased dopamine concentration and synthesis in the brain (striatum). The provision of alcohol to lab animals also decreased dopamine levels. The brain region most susceptible to damage (the hypothalamus) in thiamin-deficient animals is the very same region of the brain that produces dopamine.[vi]

In 2013, the first reports were published demonstrating the use of high-dose thiamin among Parkinson’s disease sufferers resulted in considerable improvement in measured motor function (31.3% to 77.3%). Injection of high-dose thiamin was effective in reversing symptoms.[ix]

Then, another study published in 2015 confirmed that injectable thiamin treatment (100 mg twice a week) improves motor-nerve function among Parkinson’s patients.[x]

In 2016, researchers in Italy reported on the successful use of high-dose thiamin among Parkinson’s patients. Notably, all of the patients had normal blood levels of thiamin yet thiamin therapy led to significant improvement in Parkinson’s symptoms. There were no adverse events.[xi]

The main finding of the study was an association between low thiamin in the diet reported 2-8 years prior to the onset of symptoms and diagnosis. Impairment of olfaction (sense of smell) is a characteristic and early feature of Parkinson’s disease, these researchers wrote. Involvement of many B- family vitamins appears to be involved in the decline of smell. Therefore, a decline in the sense of smell may serve as an early screening tool for Parkinson’s disease.[xii]

Because of a change in Western diets, Dr. Derrick Lonsdale, the reigning clinical authority on Vitamin B1, says the high sugar/carbohydrate diet of today results in a return of the scourge of beri beri. The problem is, modern medicine observes symptoms of this nutrient deficiency disease and treats those instead of its cause.

Western populations are paying a high price for poor absorption or depletion of thiamin due to consumption of alcohol, drugs like diuretics (water pills), refined sugar, carbohydrates, and even coffee and tea.[xiii] The ordeal of undetected thiamin deficiency is only exacerbated by the modern paradigm of treating symptoms of disease as if they emanate from the drug deficiency, not a nutrient deficiency.

As of 2014, there were 23 medicines under development for Parkinson’s disease. Drugs only serve as a distraction for a disease that may emanate from a vitamin deficiency.

The earliest sign of Alzheimer’s disease is also a decline in the sense of smell.[xvii] That was first reported in 1974.[xviii]

Accumulation of beta amyloid plaque in the brain begins up to 20 years before symptoms occur. With so many Americans now living into their eighth, ninth, and tenth decade of life and 44% of age 75-84 adults affected, it is too late to conduct a long-term controlled study to head off this anticipated Alzheimer’s plague. We are going to have close to half of the senior adult population living with Alzheimer’s memory loss and the other half of that population taking care of them!

The provision of the entire family of supplemental B vitamins, in particular thiamin (B1), pyridoxine (B6), folic acid (B9), and cobalamin (B12) appears to be important in the theoretical model of these diseases. Disturbed sense of smell has been reversed with Vitamin-B12 supplementation.[xix]

The best way to achieve this proposed prophylaxis is either with a B-vitamin complex or a multivitamin. Unfortunately, in most instances the provision of B vitamins in these formulas is marginal, often not exceeding the outdated Daily Value or the Recommended Daily Allowance.

A progressive fall-off in the absorption of these B vitamins due to a decline in secretion of stomach acid with advancing age, or in the case of thiamin the blockage of absorption by drugs, antacids, alcohol, sugar and carbohydrates and even presumably healthy beverages like tea and coffee, serve as sufficient evidence that doses of B vitamins need to be updated in most multivitamins if a universal attempt is to be made to head off Parkinson’s and Alzheimer’s disease epidemic.

Because of poor absorption of water-soluble forms of B1, Vitamin B1 in fat-soluble form (Benfotiamine) is the preferred form in dietary supplements but is generally not provided in B-complex or multivitamins.[xx] Fat-soluble benfotiamine is almost six times more biologically available than water-soluble thiamin hydrochloride, the common form used in dietary supplements.[xxi]

As for the doctor in Italy who has reported on the successful use of thiamin/Vitamin B1 for Parkinson’s disease symptoms, we can only say Bravo and wonder when the Nobel Prize committee will take notice.

[i] “Videos Parkinson’s Patients before and after treatment,” Ultima Edizione.eu, at http://www.ultimaedizione.eu/videos-parkinsons-patients-treatment/. (Be sure to click the before-and-after video tabs.)

[xiii] Derrick Lonsdale, “A Review of the Biochemistry, Metabolism and Clinical Benefits of Thiamin(e) and Its Derivatives,” Evid Based Complement Alternat Med, 2006 Mar; 3(1): 49-59.